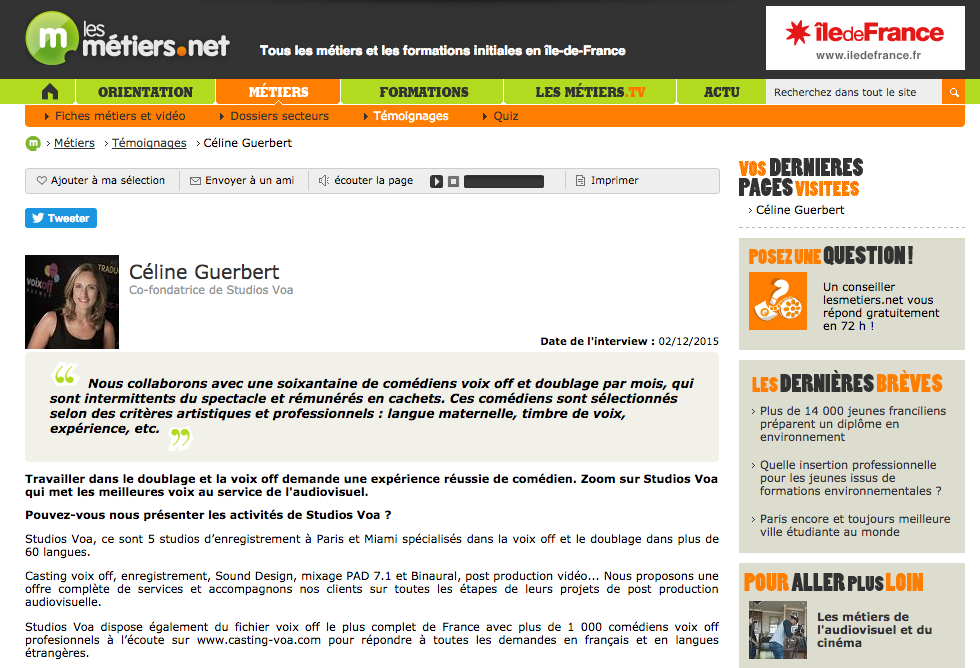 Interview of Céline Guerbert for the French website Les métiers.net

On Wednesday, December 2nd, Céline Guerbert, co-founder of VOA Voice Studios was interviewed by journalist Sandrine Damie, for the website Lesmétiers.net. Céline addressed the creation of Studios VOA, recording studios designed for voice-over and dubbing in more than 60 languages, and the profession of voice actors.

Founded in 2007, Studios VOA offers a wide range of services for voice-over and dubbing, in more than 60 languages! With more than 120 projects recorded every month, Studios VOA expanded significantly since its creation, notably with the opening of a new recording studio on Miami, Florida! A growth which was rewarded with an “Export Trophy“, granted by the French Chamber of Commerce and Industry (CCI), in the category “successful establishment abroad”. In this interview, Céline comments on the creation of the company and its development, both in France and internationally, which benefitted from the support of many organizations such as: Réseau entreprendre, BPI, Coface, and CCI 93.

“Performing for voice-overs or dubbings is a real profession!”

We collaborate with about 60 actors every month to record voice-overs and dubbing. We pay them in fees, which let them benefit from the French special status for contract workers in the entertainment industry. We select the actors according to artistic and professional criteria: their native language, tone of voice, experience, etc.

With 5 studios in Paris and Miami and working with more than 1000 actors in over 60 languages, VOA Voice Studios “puts the best voices at the service of audiovisual projects”. Céline Guerbert seize the occasion to remind that the most important quality to perform voice-overs and dubbings is to be a professional actor. Beyond that, one has to “practice, practice and practice even more!”.
Performing voice-overs and dubbings is a matter of professionals: it requires specific knowledge and skills, regarding phrasing and articulation, body positioning in front of the microphone, controlling mouth noise, mastering  lip syncing for dubbing, and so forth. It is a demanding profession in terms of work, as in terms of passion! “A lot of training is necessary, but you also have to enjoy and take pleasure in every project you record.”

Full interview in French at :
http://www.lesmetiers.net/orientation/p2_451361/celine-guerbert-co-fondatrice-de-studios-voa